You can directly download the file from Archive.org here.

"We Dream For Jeanne" for Spider Robinson

"Change is in Season" from Matthew Anderson

"Chap My Pride" from Static Captain

"In My Dreams" from Natalie Brown

This program sponsored by You, our loyal listeners! Want to help? Go to our Donate page!
at September 09, 2009 No comments:

Now, ain't that a hell of a thing

I'm in school, now, studying Media Production. There's a lot I need to learn there. I'm pretty confident with audio, though I find Adobe Audition quite daunting. Video, well, I just don't get that. I suppose if I'd grown up with access to video recorders and such, like some of these kids did, it'd be another story. Never could afford video hardware, never had the option to simply fiddle and try things, so I never developed the sort of confidence these younger folks have. That's okay; I'll get there eventually. I haven't grown stupid in my old age.

Only one obstacle is utterly beyond me. I'm required to take a course in "College writing." I know I'm not a brilliant writer. I know a number of brilliant writers, and I've read their work, and I pale in comparison. I'm fine with that. I am a good writer, and certainly a practiced one. I spent a significant part of the last thirty years in jobs where my writing skills were vital to my work.

And now I'm taking a mandatory course that is apparently designed to turn an incompetent writer into a barely adequate one. The course requires following a very strict format, word by word, sentence by sentence, resulting in writing that shows every seam, crease, and scotch-taped-together phrase. And to pass the course, I need to spend the next four months writing down to this standard, rather than up to my own standards. This lock-step blather is better suited to a computer program than an actual writer. And it's presented as "College writing."

I don't want to do that. I doubt I can do that. I sure as hell can't do that for four straight months. To quote Truman Capote, "That's not writing at all, that's typing."

I certainly understand the necessity of the course for students who have never really been expected to write. Coming into this straight out of high school, some of my fellow students might have no idea how to write a simple declarative sentence. I can. I can't write like someone who doesn't know how.

But to be able to graduate from the Media Studies program, I am required to write badly for four months straight. Even now, I'm wondering what they'd do if I dropped the class. Probably kick me out.

Now ain't that a hell of a thing? 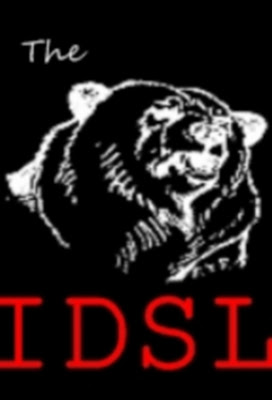 I have a whole lot of reading and writing to do for school. Which explains why I spent the last couple hours fiddling with the Merchandise on my Cafepress Store.

I decided the logo for The IDSL looks much better than the logo for Grizzly's Growls, so I switched everything over to using that logo. Had to resize a bit for some items. Came out okay, if not to my satisfaction in all cases.

One minor niggle with CafePress. What I want for myself is a nice black mug with the nice black-background logo from The IDSL on that. Turns out CafePress doesn't offer any black mugs, only white mugs. What were they thinkin'?

Another thing their product design software should allow is to resize the selected image up to whatever size the product allows. If I find a graphic simply doesn't resize well enough to suit that item, then I can create a new graphic reaching that size. But their software only allows resizing up to a given size, and doesn't provide sufficient info as to what the largest possible sizes are. So I have to create graphics by-guess-and-by-golly, upload them, try them, and if they don't work, go through the whole process again.

They also have some decidedly weird items in their product selection. I could, for example, offer a thong with The IDSL logo on it. A thong. Huh?

I don't know why I worry about it. No one has ever bought anything from the Grizzly's Growls CafePress Store, not so far, not even me. So what does it matter what merch I do or don't have, or what color it is?

SPECIAL!!! Interview with R&B artist Chris Kirby, with music and discussion of his new album, "Vampire Hotel." Listen in, call in, join in!

This program sponsored by You, our loyal listeners! Want to help? Go to our Donate page!
at September 05, 2009 No comments:

"cephalopoda of the desert" from Frowning Trees

"We Dream for Jeanne" from Spider Robinson

"Lift This Fog" from Chris Kirby

This program sponsored by You, our loyal listeners! Want to help? Go to our Donate page!
at September 04, 2009 No comments:

Something I wrote for College Comp I class the other day.

“Do you even ride that thing anymore,” my sister asked me, pointing to my bicycle in a corner of the garage. She seems convinced, now that I walk with a cane, I'm not likely to ride a bicycle. “Why yes, of course I do,” I answered. This is entirely true. If it weren't, I'd still keep my bike. Bicycles have always meant freedom to me.

I was never well coordinated as a kid, much less graceful. I grew up in the 1960s in a fair-sized family, one older brother, three sisters, lots of pets. What we had wasn't new, usually hand-me-downs, but still usable and in good repair, cause my Dad could fix things. All my siblings had bikes, that was a given back in those days on Trinity Road, the outskirts of town. My first bike was a one-speed, kinda beat-up, roughly the right size for me, mostly mine because the three older kids had newer bikes.

And those three knew how to ride, cause kids just did. I was born clumsy and uncoordinated. I tried to figure out bicycling by looking at what they did: sit on the seat, balance, pedal to go forward. Looked easy. I sat on the seat, tried to balance, and tried to get my feet on the pedals, by which time the bike was tipping over. Back to step one. No luck there. And my Dad wasn't that guy from the TV shows, running along side your bike, pushing and encouraging.

Eventually, the Abbotts from down the street somehow got all the neighborhood kids down to their front yard, a long, grassy slope. We lowered the seats on the bikes and coasted, feet easily reaching the ground. Coasting made balancing easy, and once I was coasting and balancing, pedalling was pretty straightforward. In later years, I read books by cycling professionals who taught kids to ride bikes. That turned out to be The Right Way to Teach Biking, as much as there is one.

Now I could ride all the way up to the Abbots and the Petersons, across to the Fosles, and down to the Stewarts, even all the way to Paul's Texaco. We'd ride along the dirt shoulders of Trinity Road, back when it was still a narrow, two-lane road with no great amount of traffic. And when my birthday came and I got my fancier, newer, more stylish five-speed with the big banana seat and the sissy bar and the high handlebars, my freedom of the neighborhood was nearly complete. The house where we went to get my new, used bike is still there, by the way – just to the right as you come in the main entrance of Lake Superior College.

I've had bikes ever since. Due to various sensory problems, I've never had a driver's license, and my basic transportation always had two wheels and pedals. But there was something perfect about that particular five speed. I could travel as fast as I needed to, come within a hair of a dead stop and stay balanced, even coast a bit backwards and downhill with no worries of falling over. I could ride it on the little foot trails through the woods, along the paths by Miller Creek, Chicken Pond, Coffee Pond. Our whole family would ride along the dusty and desolate shoulder of Miller Trunk Highway up to the Target store for groceries, past the abandoned miniature golf place on the corner, and the big billboard that was there in that empty, open field for much of my childhood it seemed: “Coming Soon: The Miller Hill Mall!” I wondered what a Mall was.

If I still had that big purple five-speed, I'd still ride it, not worrying about appearances. And I could go anywhere anyone else could go, and I'd get there eventually. On that five speed, nowhere else, on no other bike, just that one – I was graceful.
at September 03, 2009 No comments:

The Podcast Awards Are Coming!

Since I have 3 podcasts, you could nominate me three times! Just sayin'.

It’s Podcast Awards Season again and I am preparing the site tonight the firm that manages the site will be putting us in pre-nomination mode tomorrow.

We will be accepting sponsorships exactly as we were last year so be the first to get your sponsorship dollars in.

The awards take a huge amount of work each year, so much in fact that I had considered not holding the event this year. Over the past three weeks my email inbox has been exploding and I decided to go ahead and hold the event again. I am hoping that the volunteers step up like they did last year to help because without them it is a monumental job.

Get your audiences ready

"Carry On" on J and R Grace

"Carry" from Seazon of the Fly

"We Dream For Jeanne" from Spider Robinson

"Cat Got My Tongue" from PrairieHomeRecords

"Celebrate Your Love" from sonafide

"Don't Forget About Me" from Chris Kirby

This program sponsored by You, our loyal listeners! Want to help? Go to our Donate page!
at September 02, 2009 No comments:

Pulled out my second Bluetooth keyboard. My first keyboard is just basically unusable, and my third and fourth were those iClever ones that ...